We confess, when we finally took a leap of faith and acquired our first laboratory grown diamonds, we were pretty sceptical.  After all, how could a lab grown diamond (LGD) ever compete with what Mother Earth had spent millions if not billions of years creating?  How could scientists even come close to creating, in a lab, something so extraordinary in such a short time?  But create them they did and they did it perfectly!

We are often asked if LGDs are ‘real’ diamonds and the answer is indisputably yes.  They have the same chemical composition, optical properties and physical properties as natural diamonds.  So much so that when some diamond dealers were asked to tell them apart from mined diamonds without the use of professional equipment, they were unable to.

So how did it all begin?

The race to create the first synthetic diamond started in 1797 after scientists discovered diamonds consist of pure carbon.  Surprisingly, the first proven lab grown diamonds were made by General Electric in 1954 under a very hush hush experiment called ‘Project Superpressure’.  In a nutshell, the project aimed to replicate the conditions within the earth in which carbon crystallizes into diamond – no small feat!  At the time, the main purpose of the lab grown industry was for high tech applications such as electronics, tools, laser lenses, semi-conductors, etc., not exactly items one would choose to wear on a night in the town 😊

There’s no denying that there is a shift towards LGDs.  The younger generation is being lured by their eco-friendly and ethical tag (remember ‘Blood Diamond’?) and if that’s not enough, the price tag is sure to tip the scales!  Consumers want an alternative that offers the best stones for less money and as LGDs cost about a third of the price, they tick all the boxes.

So why are they cheaper?  In simple terms, the effort taken to mine a diamond outweighs the lab grown process.  A mined diamond comes at a heavy cost when you consider they are found at approximately 150-200 km below the earth’s surface.  It is estimated that 10 tons of rock is shifted to yield 5ct of diamond and that’s after ensuring the site is profitable. That means a lot of testing, sampling, excavating, manpower, machinery and time.

In comparison, putting a little diamond seed in a ‘high-pressure cooker’ that will run for about 6 weeks is definitely more eco-friendly and less costly.  Some will argue that it requires a tremendous amount of energy to run the equipment but many labs are now converting to renewable energy, a win win situation.

That’s ok! Jewellery is personal and has always been an expression of oneself.  So whether it’s a lab grown diamond or a mined diamond all that matters is that you feel incredible wearing it!

For more information on lab grown or mined diamonds, simply contact us 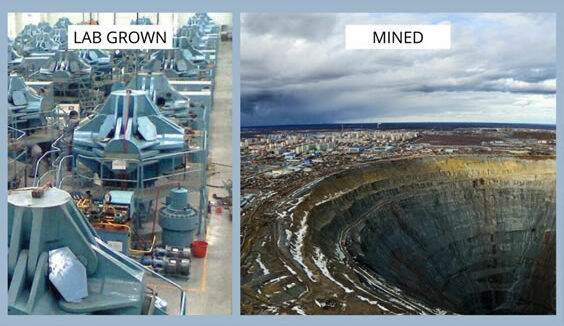